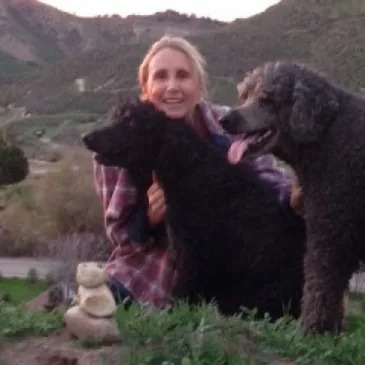 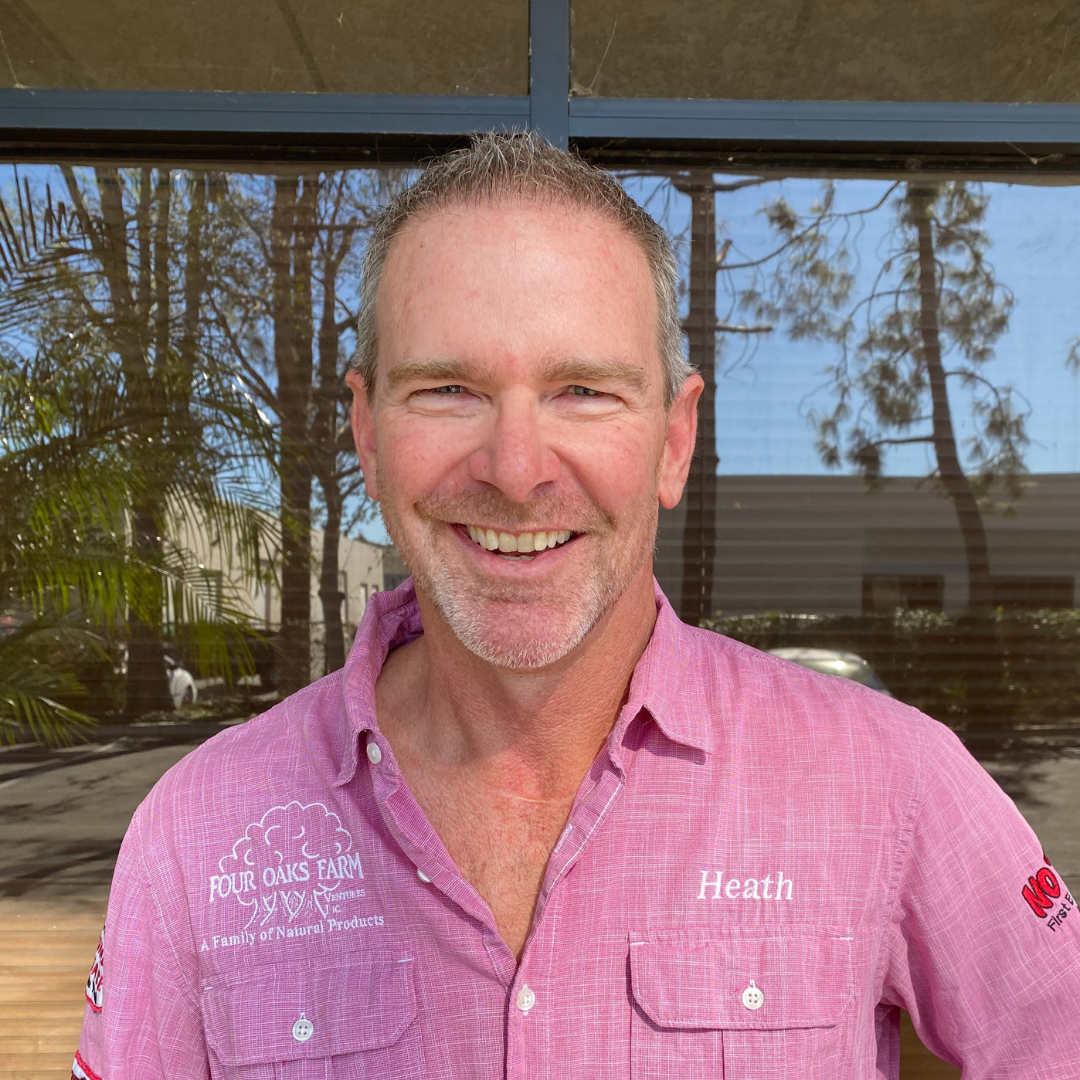 Rest assured that Four Oaks Farm products will do what we say they will do. “Why?” you ask. Here is our story.

Our Four Oaks Farm facility hosts between 60-70 sport horses on any given day. Each day horses come and go. The new ones arrive with every possible injury. Working side by side with the top vets on the west coast, it is our job to rehab the injury, slowly move the horse into a reconditioning program, and finally, when they leave us, they are ready to get back to full training.

When you care for so many injuries, of course, you have a tack room brimming with every conceivable animal health product. We have tried them all. Many work great. Unfortunately, often there is that horse that just NOTHING works. All horse owners can relate.

This is when the owner, Kathleen Busfield, goes to work. She already knows what doesn’t work on the horse, so she starts from scratch, creating and tinkering like a mad scientist. Seriously. It’s something to watch her work. She hunkers down for hundreds of hours of research. Then suddenly, stacks of boxes begin arriving containing potential ingredients. So focused is she that she barely sleeps or eats.

And then the “putting together” phase begins.

When she is in her zone, everyone at the barn knows NEVER to take anything from her fridge because while a bottle may say “Welch’s Grape Juice,” it is far more likely one of her test concoctions. [ Yep, some of them are not very tasty.] Finally, when her creation is complete and the original horse has benefited from its use, she expands her testing throughout the barn. (Not testing a few horses for a few weeks, but testing many hundreds of horses over 1-2 years. We often have to plead with Kathleen to let us begin marketing her creation. She refuses to let her baby out of her sight until she absolutely knows it is exactly how she wants it – and most importantly, when she looks somebody in the eye and says it works – it will work.

Be sure to Scroll Down for the owners personal stories. 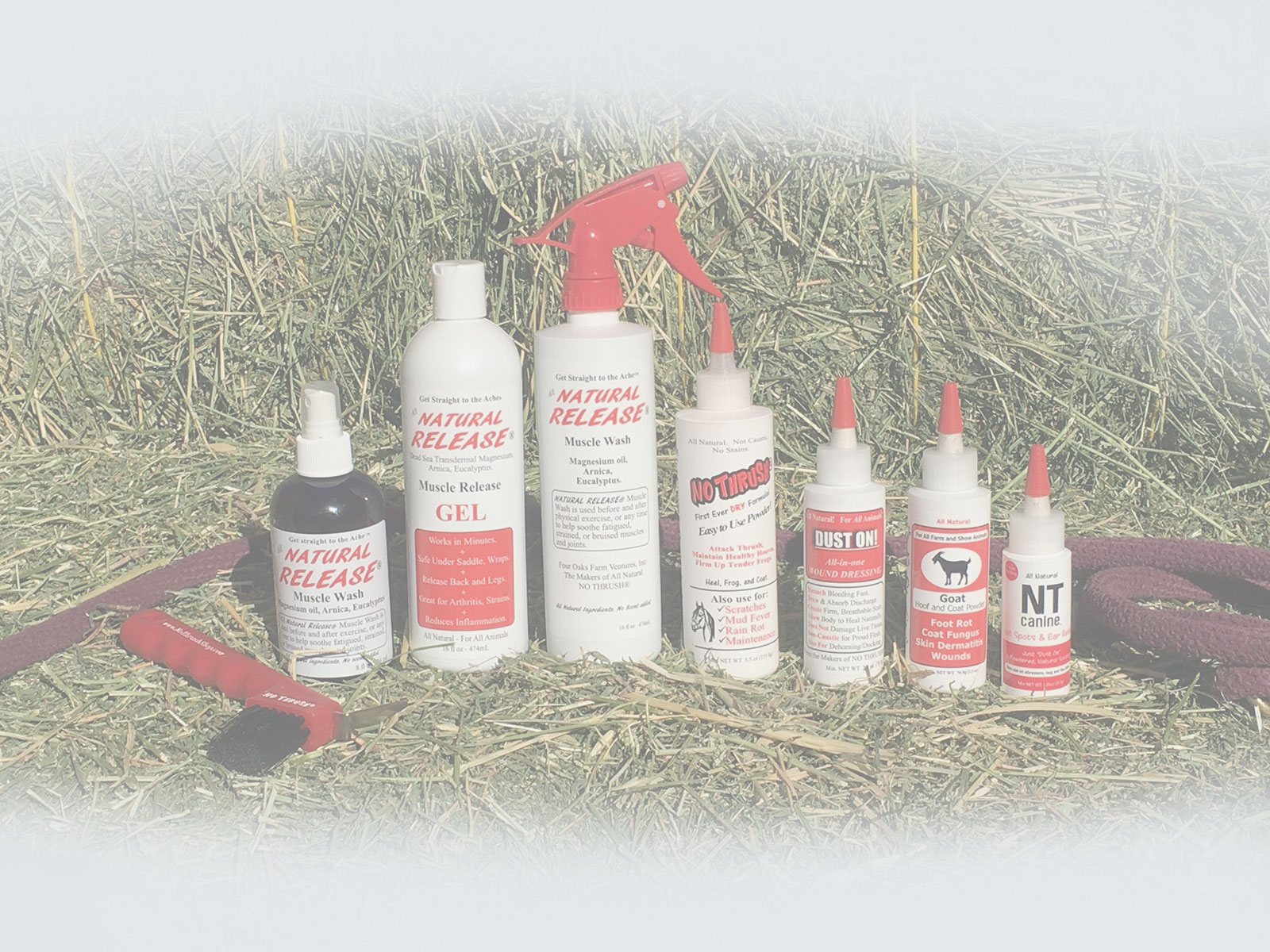 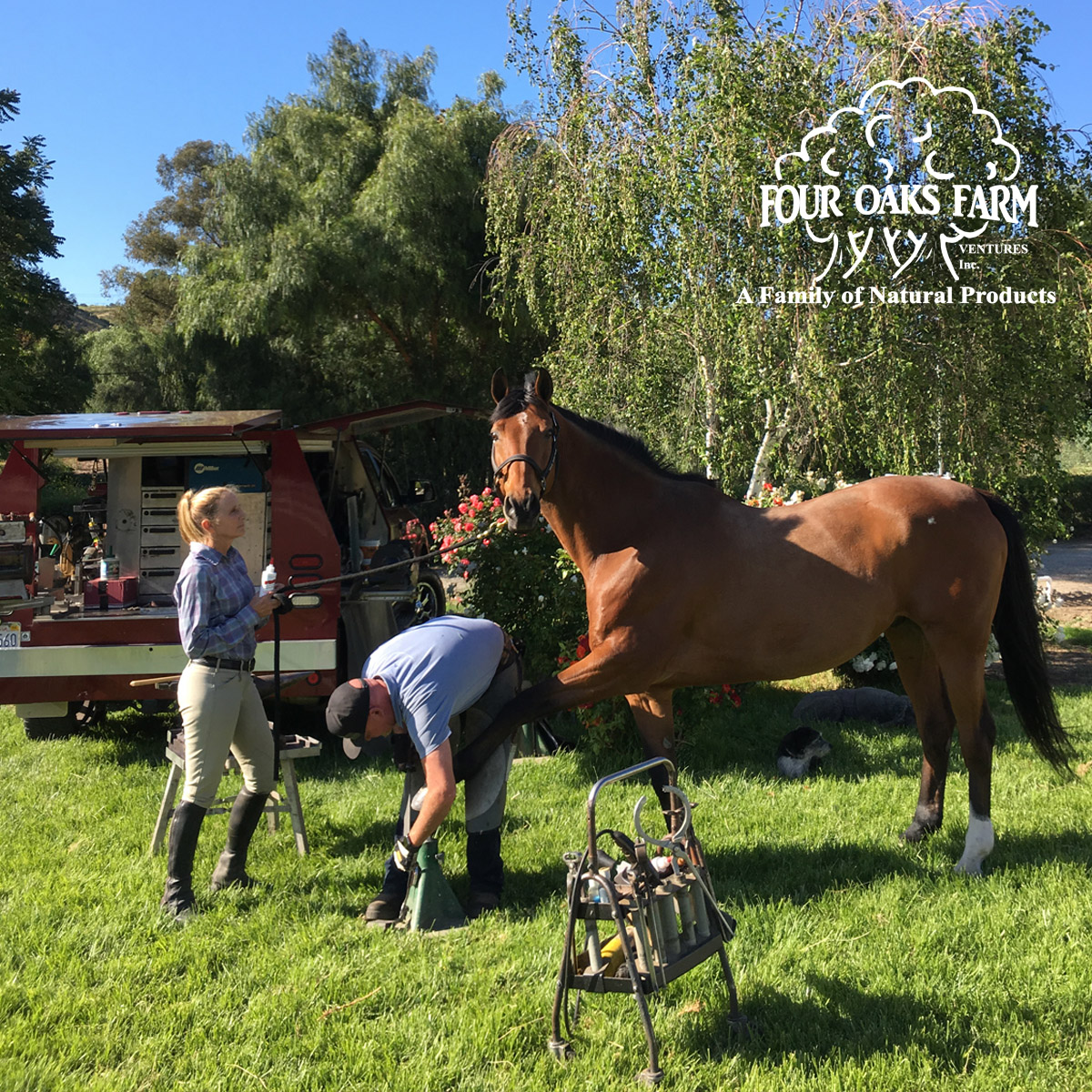 Originally from Victoria, Canada, Kathleen has been riding horses since she was 7 years old. She rode her bike to the barn, paying her way by mucking stalls before and after school. Her passion was jumping. As the years passed, she continued to learn everything she could about horses, horsemanship, and the sport. Throughout her youth, and in spite of all the distractions of high school, college, and the other sports she enjoyed, Kathleen’s true love remained horses. She became a trainer’s assistant and soon found herself working at a prestigious barn in Oregon. Eventually, she ended up in Southern California. She moved her way from assistant to head trainer and eventually began her own successful riding/training program.

In 2004 Kathleen saw a desperate need for a quality sport horse rehabilitation facility. After all, most of the horses she works with are pro athletes, and just like a professional basketball or football player, injuries occur. At that time in the Los Angeles area, there were few, if any, facilities that specialized in rehabilitation and reconditioning.

She found a 50-acre parcel of land in the quiet hills of Simi Valley, just 30 minutes from the crowded LA Equestrian Center. There she began building. Now not only does Four Oaks Farm have over-sized bright stalls, eurosizer, treadmill, 14,000 sqft of rubber matting, etc., but Kathleen also built a 250’x150′ USEF arena to properly recondition the horses once they are able to get back to work.

In 2010 Kathleen’s first product creation became a reality (No Thrush Powder). She was confronted with a case of equine thrush that she nor any of the vets she worked with could get under control. They used and tried everything. She finally sat down on the feed bucket, and pondering, asked herself,

“What’s the one common denominator of all the products I have used for thrush?”

The answer was: They are all liquids. Well, in truth, most of us horse people have wondered why we were putting a “wet” product on a “wet” problem. Secondly, all the thrush products on the market were caustic. Caustic products kill bacteria, but they also damage live tissue., creating secondary problems. So with these two things in mind, she unknowingly launched the Four Oaks Farm Research and Development Program. 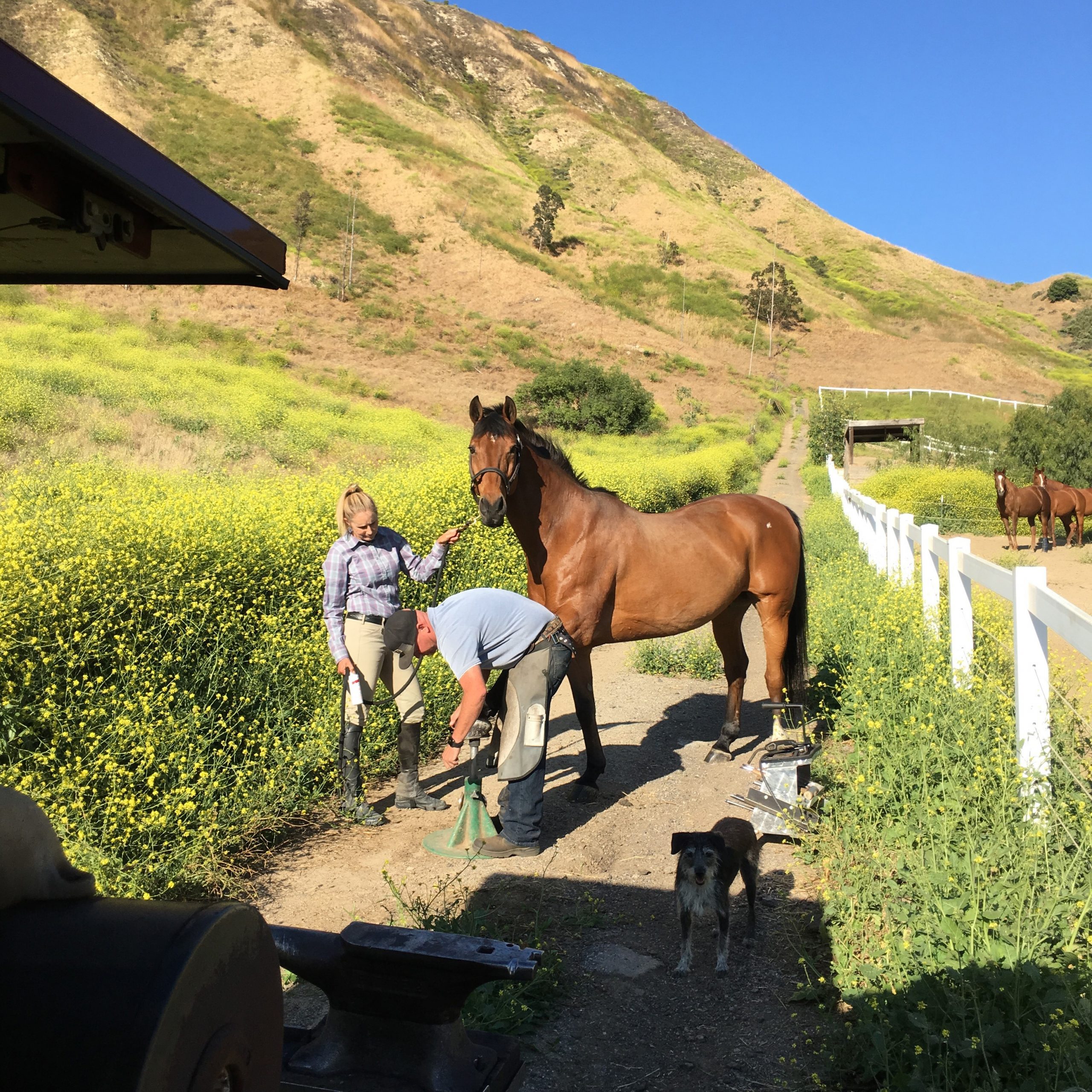 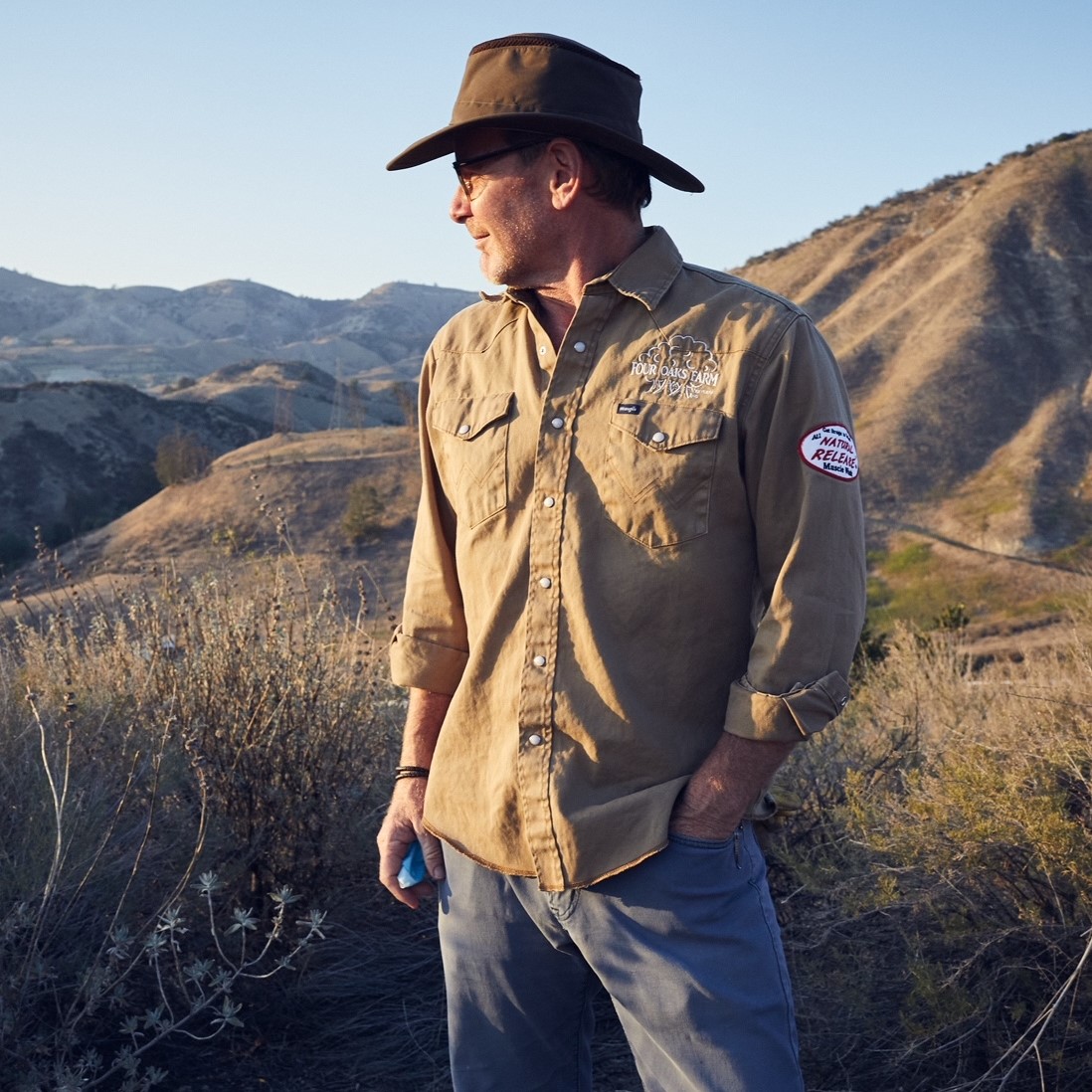 At the Farm, Heath is otherwise known as “Kathleen’s husband.” He is the guy that floats around on the weekends lugging toolboxes, skill saw, sprinkler fittings, and plumbing implements – fixing this and that and trying to stay out of the boss-lady’s way. Heath grew up in the Colorado mountains, living the rural life. He worked with horses from an early age. A big kid for his age, Heath spent the summer between 6th and 7th grade on a logging crew high up in the San Juan Mountains. His job was to section the felled logs into 8 ft lengths, and then run a team of gigantic draft horses to drag the logs out of the deep forest. He nicknamed the drafts Heckle and Jeckle due to their often caustic sense of humor.

At age 13, he spent the summer working at a Colorado dude ranch, wrangling horses (and people). He learned how to drink coffee during those 4:30 am mornings. Herding 30 horses out of a 100-acre pasture every morning required caffeine and patience. Heath moved to South Dakota at age 14. With his mom’s help, he started his first business. He purchased 4 two-year-old colts, broke and trained them, and then sold them. The company was a bust, however, because he lost a quarter of his profits after falling in love and keeping “Good ol’ Sackett” (who was a not a so “good” Arabian roan) Sackett was a runner. If you gave him his head, he would bolt, ears back, eyes white and manic. Heath truly had to cowboy up to get him under control. Quickly he devised a plan to only let Sackett “run” when he was headed uphill. It had to be a big hill, though, because if Sackett wasn’t blown by the time he reached the top – the downhill white-eyed run was terrifying.

Heath left home at 17 and moved to Aspen, Colorado. There he met a photographer while busing tables. The woman asked him to sit for some fashion photos. They weren’t very good, but the experience began a new twisting trail in Heath’s life. He moved to Los Angeles, did some modeling while also training horses in Malibu for a Hollywood film mogul, and within a few months, he was invited to model in Paris. He stayed in Europe for a year. (Where, incidentally, he was struck by lightning during a solo camping trek up Mont Blanc, but that’s another story.)

Back in LA, Heath quickly moved from modeling to acting. He worked with top celebrities and directors in the industry with stints in Wyatt Earp, Doctor Quinn Medicine Woman, and eventually as a series regular on The Young And the Restless. After 20 years, he transitioned again, from acting to writing, penning two novels and a memoir, and countless film and television scripts.

Finally, he met Kathleen. Except for the western movies he performed in, Heath had been away from his equine roots for most of his time in Hollywood, and he could not believe his luck when he found a “horsewoman” in the middle of LA!

In 2010, as he watched Kathleen working on her first variations of No Thrush powder and then saw how her colleagues kept begging her to make some more of her “Thrush Stuff,” Heath finally suggested,

“This is clearly something that works, and people seem to want it. We should make a big batch and see if it will sell.”

That was the beginning. The husband and wife team worked in the garage into the late hours making powder and working out the logistics. There was a lot to learn! Internet sales went crazy right away, and they were up until midnight every night packing boxes. Soon No Thrush was in the local stores and then spreading outward in a ripple effect. Within a year, the product was sold nationally and had jumped the pond into the EU, Japan, AU, NZ, etc.

Heath now runs the Four Oaks Products production facility. Just as he does on the weekends at the farm, he wears many hats and carries many toolboxes. 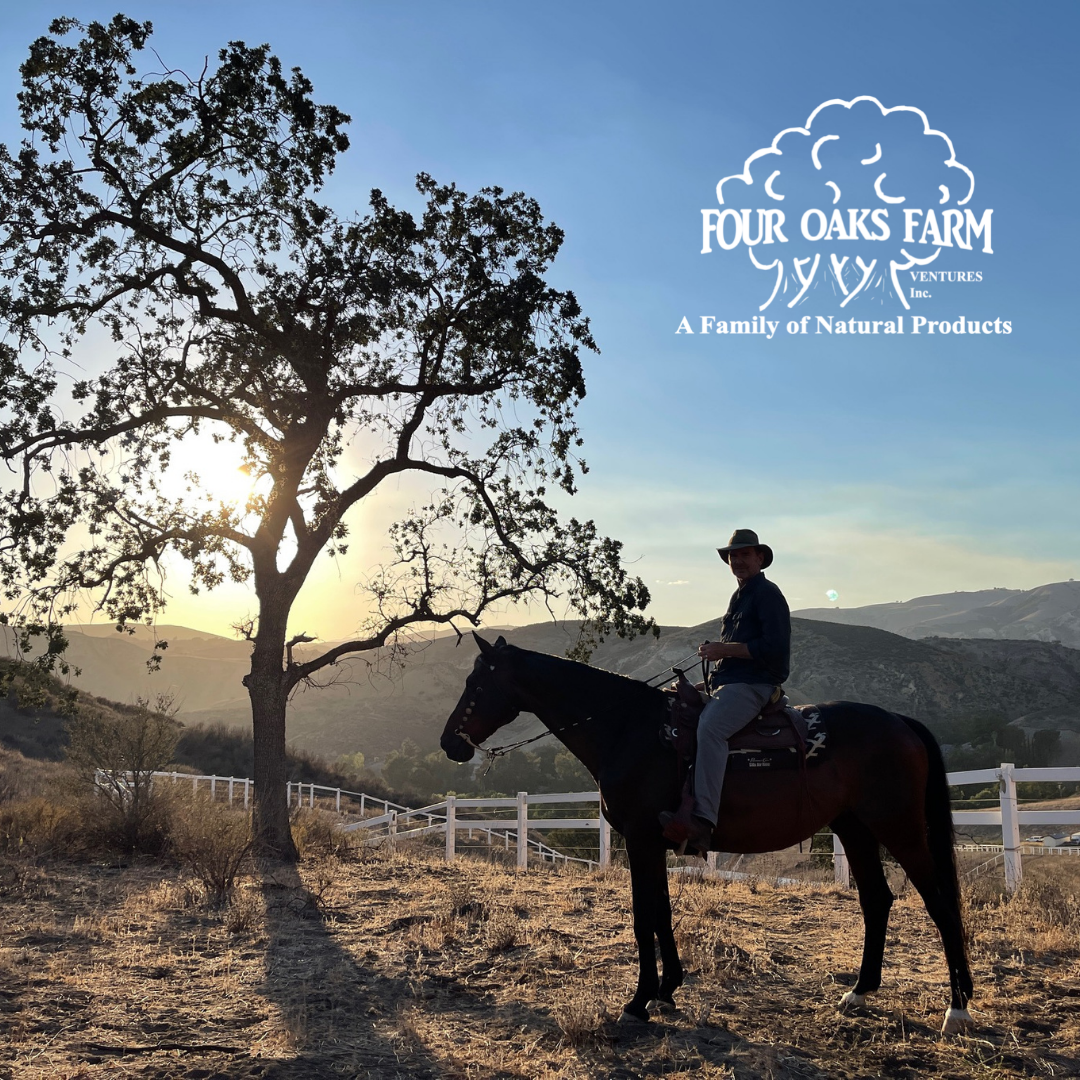